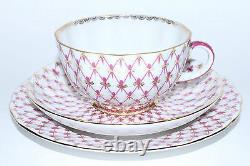 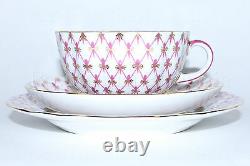 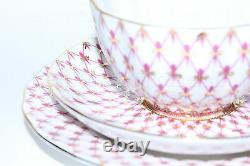 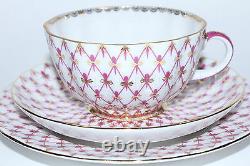 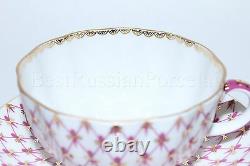 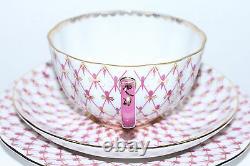 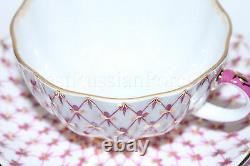 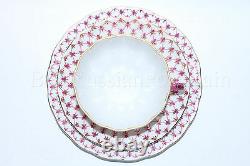 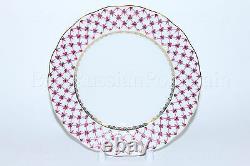 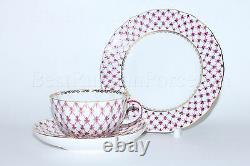 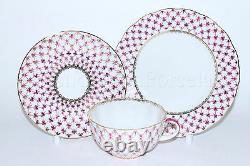 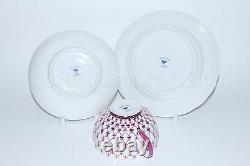 Cup, sauser and desert plate " Net Blues ", 3pc set , Porcelain Hard, NEW. The item is HAND PAINTED and has a stamp of the factory on the bottom. Dear customers, visit our store, please.

There are a lot of as beautiful things as this one there. Here is our store - Best Russian Porcelain. For more news, subscribe to our store.

Hard porcelain, Gold Leaf 22k. Graceful, bright, summer variation of the well-known pattern "A cobalt grid", the Imperial porcelain plant which has become the card. The decor is made based on a service list "Own", created at Imperial porcelain plant in the middle of the XVIII century for the empress Elizabeth Petrovna. Bright asterisks of the 22nd karat gold flash in places of crossing of lines of cherry color. If to look narrowly, they are similar to easy dragonflies or the small angels flied to house, cozy tea drinking. Any set of Imperial porcelain plant is, first of all, the highest quality and beauty argues with which anything can't other. The beauty, refinement, practicality, improbable durability and all that is so appreciated by modern people worldwide, connected together, having become really the best of the best. The history of Imperial porcelain factory is inseparably linked with history of Russia, and its production the Russian art porcelain is presented in collections of the largest museums of the world. The imperial porcelain factory founded in 1744 in St. Petersburg under the decree of the daughter of Peter the Great empress Elizabeth became the first porcelain enterprise in Russia and the third in Europe.

It is here where the talented Russian scientist D. Vinogradov (17201758) discovered a secret of production of "white gold". Products of Imperial porcelain factory which are created by artists of top-class, strike with the beauty and refinement of judges from around the world here already nearly three hundred years, being an embodiment of beauty, elegance and a delicate taste. Imperial porcelain is a symbol of refinement and luxury of your house, reflection of your unique style. It decorates interiors of houses of persons, whose taste doesn't raise doubts.

Among them the former first lady of the USA Laura Bush, the former first lady of Brazil Marisa Letisija Lula da Silva, the queen of Malaysia Tengku Fauziya Abdoul Rasheed, the first lady of Mexico Marta Sakhagun. Director Valery Fokin, well-known performers Elena Obraztsova, Mireille Mathieu and many other famous people. Some details of decor are hand-painted so they can differ in colors as they are done by different masters. We are ready to answer all your questions.

Thank you for your interest! Includes: Cup, Saucer, Desert Plate. About, The Imperial(Lomonosov) Porcelain Factory.

The history of one of the oldest European porcelain ware manufacturers dates back to the 18th century, when according to the edict of the daughter of Peter the Great Empress Elizabeth the Imperial Porcelain Factory was established. Thanks to the talented Russian chemist, the inventor of Russian hard-paste porcelain Dmitry Ivanovich Vinogradov the secret of white gold production was unlocked. For the first time in history of ceramics Vinogradov presented the scientific description of porcelain production thereby enabling manufacturing of high quality porcelain ware out of domestic raw materials. What especially makes The Imperial Porcelain Factory that famous is the production of magnificent table sets that started during the reign of Catherin the Great. Catherin porcelain was recognized as a piece of art together with canvases and sculptures of prominent masters.

Among the most well-known table-sets ensembles are Gurev, Armorial table sets, and collectors plates from the Gothic stained glass table set. Later on the IPF started producing porcelain dolls small figures of animals and people that were used for table decoration. The main task, which was given to the Imperial Porcelain Factory, was to provide whole Russia with porcelain- which still remains to be its motto.

Till present day the IPF produces magnificent porcelain ware according to the sketches of most famous vases and table plates that belonged to the royal family. In our shop you can find the unique plates manufactured by The Imperial Porcelain Factory based on the original table sets, kept in the State Hermitage Museum and former residences of the members of the royal family. Incomparable hand dropped vases in Russian Empire style such as White night on Moika River, Michael Castle; marvelous vases made in technique of glazed landscape painting such as Russian side, Hermitage are made in a skillful way by the masters of the IPF and represented in our shop. You can find a great variety of porcelain statues made in the technique of hand dropping with manual overglaze painting such as The Firebird, Lady with a parrot, Fortuneteller and countless numbers of other masterpieces. Touch the sumptuousness, in the best traditions of the Royal Court.

The seller is "best_russian_porcelain" and is located in St. This item can be shipped worldwide.