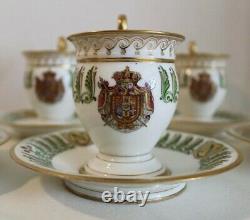 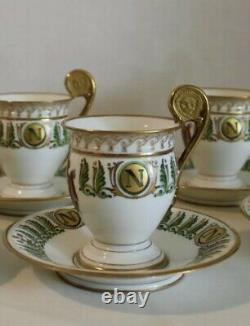 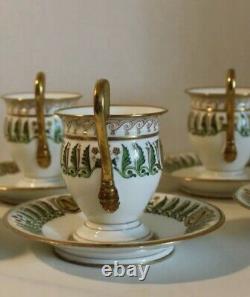 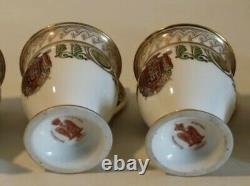 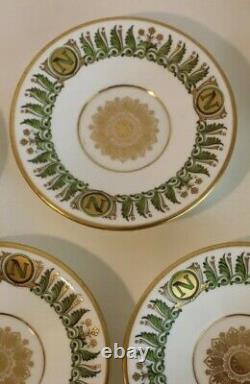 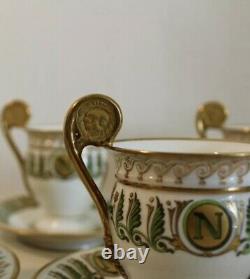 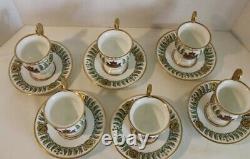 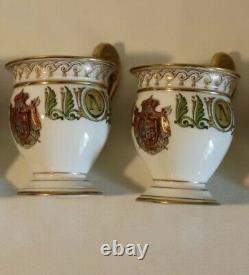 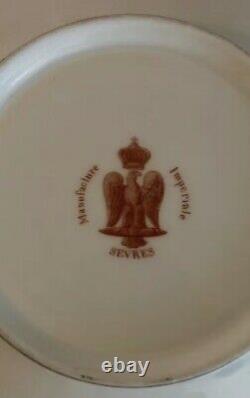 RARE SEVRES NAPOLEON SET CUPS & SAUCERS 19TH CENTURY. Beautiful and rare to find antique Sevres Imperial Napoleon set of 6 cups & saucers dating to the early 19th century. Wonderful set each cup having Napoleon's royal coat of arms as King of Italy and all pieces have other Napoleon symbols & decoration. The coat of arms of Napoleonic Italy was the coat of arms used by the Kingdom of Italy (18051814) during the reign of Napoleon as King of Italy. Marked with Manufacture Imperiale SEVRES crowned eagle mark that was used in 1810 - 1814.

The Kingdom of Italy was born on 17 March 1805, when the Italian Republic, whose president was Napoleon Bonaparte, became the Kingdom of Italy, with the same man (now styled Napoleon I) as King of Italy, and the 24-year-old Eugène de Beauharnais his viceroy. Napoleon I was crowned at the Duomo di Milano, Milan on 23 May, with the Iron Crown of Lombardy. His title was "Emperor of the French and King of Italy" (French: Empereur des Français et Roi d'Italie), showing the importance of this Italian Kingdom for him. Also beautiful gold gilt lion mask scrolling handles. Sevres Imperial Eagle mark on all pieces.

The heraldic shield is encircled by the gold collar of the Légion d'honneur and superimposed on a Napoleonic eagle wielding a thunderbolt. Above the imperial eagle rises a Napoleonic star. The eagle is surrounded by a green mantle that is lined with ermine and surmounted by a royal crown in gold. We do however make every possible attempt to accurately describe the inventory we sell and stand behind it. The item "RARE FRENCH SEVRES IMPERIAL NAPOLEON KING Of ITALY SET 6 CUPS & 6 SAUCERS 19TH C" is in sale since Saturday, September 28, 2019.

This item is in the category "Collectibles\Kitchen & Home\Dinnerware & Serveware\Cups & Saucers". The seller is "principato1" and is located in Austin, Texas. This item can be shipped to United States.