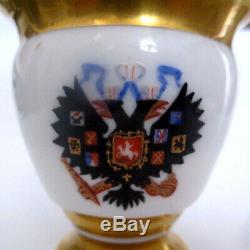 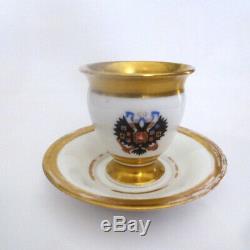 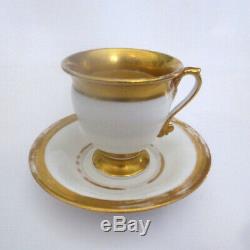 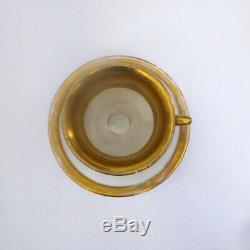 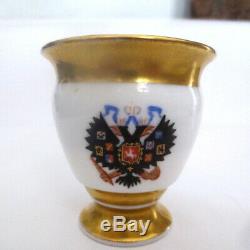 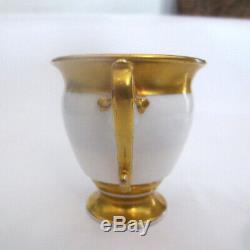 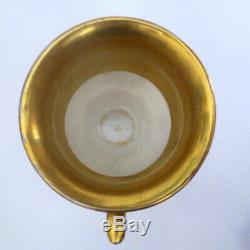 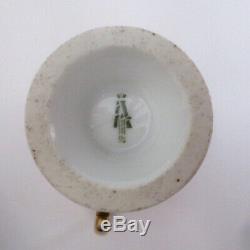 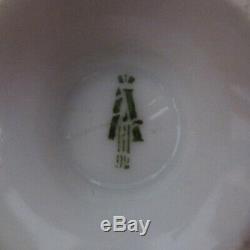 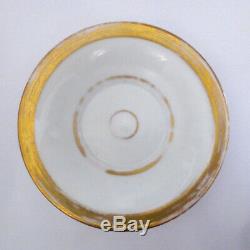 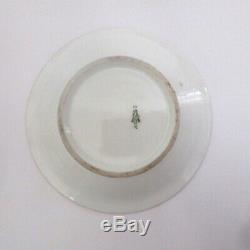 Height of cup: 3.07 in. Diameter of saucer: 4.92 in. (12.5 cm)- for more info check images. Condition: Good / Great Antique Condition: no damages or restorations. Worn gilding on some areas. For more information regarding item's condition- check provided images or ask us. An antique RUSSIAN IMPERIAL porcelain CUP AND SAUCER from the Coronation Service of Emperor Alexander III with the Imperial porcelain mark for Tsar Alexander III dated 1892. Made by the Imperial Porcelain Manufactory in St. Green Imperial porcelain factory marks in the form of Tsar Alexander III cipher.

The front of the cup is decorated with the Imperial State Seal, a thrice crowned double-headed Imperial eagle, the shield of St. George encircled by the Chain of St. Andrew on its chest, the wings emblazoned with the arms of the major kingdoms and principates making up the empire, including (clockwise) Astrakhan, Siberia, Georgia, Finland, Kiev-Vladimir-Novgorod, Taurica, Poland, and Kazan, and with scepter and orb clutched in its talons.

The underside of the cup & saucer with the green underglaze cypher mark of of Alexander III dated 1892. Although originally designed for the coronation of Alexander III and Maria Feodorovna in 1882, the simple elegance of the service allowed it to be used in multiple palaces over the following decades and additions were made during the reigns of Alexander III and Nicholas II. Dimensions: Height of cup: 3.07 in. COLLECTION "IMPERIAL" In the Imperial collection includes outstanding works of Russian art porcelain, created at the Imperial Porcelain Factory.

At their base was formed in a unique presentation style rare craftsmanship and emotional richness of products. As a rule, these works created by famous artists and sculptors, they played with all the nuances of the original. Products of Imperial porcelain plant which are created by artists of top-class, strike with the beauty and refinement of judges from around the world here already nearly three hundred years, being an embodiment of beauty, elegance and a delicate taste. From the Gatchina Palace, Alexander ruled the country with a firm hand.

In his preferences, he took after his grandfather Nicholas I, wrote a contemporary. Like Nicholas I, Alexander was a patron of the arts. In his reign, the Imperial Porcelain Factory began to prosper again.

Every Easter, numerous porcelain Easter eggs were made at the Imperial Factory for the Tsars family to be given away as gifts. Alexanders order of 1887 states, For His Lordship the Emperor, twenty eggs with the images of saints and fifty regular eggs, decorated and large-sized; for Her Ladyship the Empress, only fifty large eggs with various patterns.

In 1883, Alexander commissioned the splendid Raphael service for Catherines Palace in Tsarskoe Selo. The design was based on the frescoes of the Raphael Loggias in the Vatican Palace, painted by Raphaels pupils after his sketches and under his guidance. An exact replica of the Loggias was installed in the Winter Palace under Catherine II that served as a reference for the Raphael Service. It took twenty years to produce the Service, and in 1904, it was delivered to the court of the Dowager Empress Maria Fedorovna. In 1888, the Imperial train derailed, and Alexander III single-handedly lifted the roof of the car from the wreckage allowing his familys escape.

During this rescue effort, the Tsar injured his kidney, leading to his death 6 years later. The Imperial Porcelain Factory (Russian: , romanized: Imperatorskii Farforovyi Zavod), also known as the Imperial Porcelain Manufactory (abbreviated as IPM), is a producer of hand-painted ceramics in Saint Petersburg, Russia. It was established by Dmitry Ivanovich Vinogradov in 1744 and was supported by the Russian tsars since Empress Elizabeth.

Many still refer to the factory by its well-known former name, the Lomonosov Porcelain Factory. Attempts to reveal the secret of hard paste true porcelain-making had expanded to Russia since the visit of Peter the Great to Saxony in 1718; there, he saw Meissen porcelain at the Dresden court.

Dmitry Ivanovich Vinogradov, a talented mining engineer who studied metallurgy at Freiberg, Saxony, invented the formula for the first porcelain manufactory in Russia, established in 1744 by order of Empress Elizabeth, daughter of Peter the Great, to serve native trade and native art. For a long time, the factory produced wares almost exclusively for the ruling Romanov family and the Russian Imperial court, and for political and diplomatic gifts by them.

Dinner services, often very large indeed, were a staple, and from the 1780s, figures of Russian peasants and ethnic minorities of the Russian Empire taken from book illustrations. These last continued until the Revolution, and largely replaced the repertoire of pastoral, gallant, and commedia dell'arte figures familiar from factories in the rest of Europe. From the arrival of Neoclassical styles, the factory became known for large and ornate vases with painted scenes.

The Russian porcelain by Vinogradov had qualities similar to Meissen porcelain, while its formula (which consisted of only Russian ingredients) took its style from Chinese porcelain. At the beginning of the Vinogradov period, the motifs were monochrome and simplified; by the end of this period, the fine miniatures were completed on porcelain. Gold leaf for gilding porcelain was prepared from golden coins from the Imperial Treasury. The Golden Age of Catherine the reign of Catherine II the Great was the age of prosperity for the fine Russian porcelain. In 1765, the manufactory was renamed the Imperial Porcelain Manufactory (IPM).

From the very beginning of Catherine's reign, IPM was obliged to produce fine porcelain and also to bring profit. The Imperial Court's need for porcelain was large, and the permanent orders from the Court let IPM maintain the highest quality. During the reign of Paul I (1796 to 1801), Russian porcelain continued to develop in style of Neoclassicism, with the increasing influence of Hellenic and Roman motifs.

18011825 The works of the Imperial Porcelain Factory abound in the former residences of the Russian emperors, such as Peterhof and Tsarskoe Selo Masters from the Königliche Porzellan-Manufaktur Berlin and porcelain painters from the Manufacture nationale de Sèvres were invited to Saint Petersburg, and the kiln chamber was restructured. In 1806, with the imposition of Napoleon's Continental Blockade, the import of porcelain to Russia was banned and competition between a variety of Russian private porcelain factories arose. The production line of IPM porcelain was divided into a department for producing expensive low-profit Royal presents and a department producing ordinary porcelain for consumers among the Russian nobility.

18251894 From the reign of Nicholas I (1825 to 1855), imported kaolin from Limoges began to be used. Porcelain plaques and large porcelain items of high perfection were made. A special method of durable fire gilding that could be burnished was invented, although subsequently lost. Nicholas I took a personal part in the managing of IPM.

The projects for porcelain items were handed in to him for his confirmation. The manufactory's own museum was established in 1844. Later on, a library was formed from books on art, paintings and engravings. By the beginning of the reign of Alexander II (1855 to 1881), IPM worked only with imported raw materials. A year before the abolition of serfdom, the IPM workers had been given their freedom, but many of them continued to work at IPM.

However, the number of the Imperial Court's orders decreased. The porcelain was produced mainly on old models. From the beginning of the 1870s, copying of famous paintings on porcelain ceased, and landscapes were rarely painted. Instead, purely ornamental decoration prevailed. IPM started to use coloured glazes and to decorate their porcelain with pâte-sur-pâte patterns. The idea of closing down the useless and unprofitable enterprise emerged in 1881. Later on, the idea transformed into the assignation of IPM to the Imperial Academy of Arts, but Alexander III, whose reign had just started, commanded the best possible conditions (from a technological and arts point of view) for IPM so that IPM could bear its name "Imperial" with dignity and set a standard for all private porcelain manufactory owners. In 1889, the new formula was invented for the dark red sang-de-boeuf glaze. Since 1892, the underglaze decoration technology had been mastered with the help of Danish experts. The Russian Emperor was married to a Danish princess and paid interest to the underglaze painting. « », 1765 , 1917 , 1925 200.

The item "1892 Tsar Alexander III Imperial Russian Antique Porcelain/ Ceramic Cup & Saucer" is in sale since Saturday, March 7, 2020. This item is in the category "Antiques\Decorative Arts\Ceramics & Porcelain\Cups & Saucers". The seller is "yaay2007" and is located in USA or-. This item can be shipped to United States, all countries in Europe, all countries in continental Asia, Canada, Australia.